Team Mulciber, a group of students from the University of Maryland’s Departments of Fire Protection Engineering (FPE), Mechanical Engineering (ME), and Environmental Science & Technology, was highlighted in the March 2014 issue of Popular Mechanics for its production of a wood-burning stove with emissions described by the magazine as “so low, they were almost unmeasurable.”

The team, which took its name from an alias of Vulcan, the Roman god of the forge, was the only university-based group entered in the 2013 Wood Stove Decathlon. Sponsored by the Alliance for Green Heat, the international competition challenged entrants to design and build low cost, low emission, and highly efficient wood stoves in the hope of improving a much neglected, but still widely used, technology.

“Presently [wood stoves are] mostly used by people in low-to-mid income rural communities,” explains team captain and ME Ph.D. student Taylor Myers (B.S.'12, fire protection engineering). “These are people who don’t necessarily have access to natural gas, which is far and away the cheapest way you can heat. But wood is actually the second cheapest, so a lot of people switch to wood or use it as a supplementary heat source in order to offset rising energy prices.”

“We had the lowest emissions ever recorded for a wood-burning stove,” says Myers.

“We had the lowest emissions ever recorded for a wood-burning stove.”

The Mulciber Stove is 93% efficient and costs approximately $1200 a year to heat a home in the northeastern United States. Its innovations include a forced air system, pressurized combustion chamber, and self-cleaning filter. The stove’s chimney-within-a-chimney simultaneously warms incoming air and cools exhaust, improving efficiency while reducing emissions and heat waste. Some of the stove’s heat is converted into the electrical energy that powers its fans.

This is the third time Team Mulciber has been featured in Popular Mechanics. In late 2013, the group appeared in a pre-competition Q&A column and a story about the Wood Stove Decathlon’s People’s Choice Award. The New York Times and National Geographic have also profiled the team.

Watch a National Geographic video about how the Mulciber Stove works

Myers and teammate Ryan Fisher (B.S. '12 and M.S. '13, fire protection engineering) have incorporated a new company called MF Fire with the goal of producing and marketing stoves based on the Team Mulciber concept. MF Fire was recently a finalist in the ACC Clean Energy Challenge and is currently a semifinalist in the competition for the MIT Clean Energy Prize. The young company has also received a TEDCO Maryland Innovation Initiative (MII) grant to develop its next prototype.

“The ACC Clean Energy Challenge really helped us to get an understanding of our place in the renewable energy world and get in touch with a number of experts who have given a lot of help,” says Myers. “We received a lot of positive feedback about the value that we could offer to the public.” 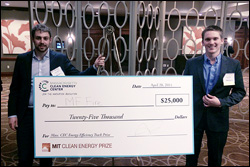 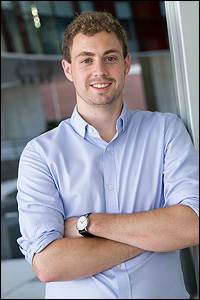 Grad Student Named One of Maryland’s “Innovators of the... 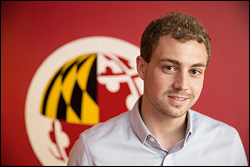 MF Fire: 2nd Place at National Competition, Featured in The... 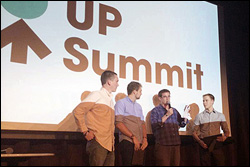 Maryland Engineering ranks #11 among public colleges in the U.S.