What We Can Learn–and Teach–from the Annapolis Mansion Fire

How did the fire get so large, so fast? How did a 16,000-square-foot mansion become engulfed in flames in minutes, and begin to collapse as the firefighters arrived? Why weren’t sprinklers installed in the home–and would they have made a difference? Why couldn’t the Pyle family get out despite the alarms going off?

These were among the questions asked in the wake of a fire that claimed six lives and destroyed an Annapolis, Md., home on January 19. The Department of Fire Protection Engineering (FPE) at the University of Maryland heard them all as reporters sought answers for a stunned community. Investigators revealed that an electrical failure had set a 15-foot tall, two month-old Christmas tree ablaze. The tree was cited as the reason the fire quickly became so intense and out of control that the Pyles and their grandchildren could not escape and firefighters could not go inside.

“…the chances of a real Christmas tree being accidentally ignited…is four-ten-thousandths of one percent,” wrote a commentator below a December 2014 PBS Newshour story about FPE’s demonstration of why fires involving Christmas trees become so deadly so quickly, based on his interpretation of the figures in a 2013 National Fire Protection Association report cited in the piece. “…Think about that next time you see the local action news team show a story about the ‘dangers of Christmas tree fires’...and share the FACTS with as many people as you can.”

The fact is that although rare, these fires happen, and they can happen to anyone, even people living in a home built to the highest standards. Regardless of where and how a fire starts, the very presence of a Christmas tree–a large, often dry object with a high surface area, good airflow, and thousands of small needles and twigs that act as kindling–can make things go from bad to deadly in literally seconds.

This is perhaps what most surprised people who attended FPE’s demonstration–that a tree would not burn slowly, like a log in a fireplace. There were other lessons as well: that such a fire could not be put out with a fire extinguisher; that a fresh, watered tree is the best choice, but not immune to catching fire; and that the purpose of a home sprinkler system (which was neither required nor installed when the Pyles built their home) is to slow the spread of flames and cool the air to give people more time to escape, not put the fire out. FPE department chair Professor Jim Milke and Ph.D. student Isaac Leventon found themselves repeating these facts only a month after Leventon ran the demonstrations.

“Above all, our duty is to educate,” says Milke. “The rarity of an event doesn’t diminish what we can learn from it, or how to help prevent it in the future. Sadly, many of our opportunities to teach, and learn, arise from tragedies such the World Trade Center collapse, The Station night club fire in Rhode Island, and the recent incident in a Washington, D.C., Metro subway tunnel. Our classroom discussions concentrate on how these incidents developed into tragedies and what can be done to avoid them, including a review of the choice of better materials, the role of fire protection systems, and how fire protection engineers can better assist emergency responders.”

To learn more about the Annapolis mansion fire, see:

To learn more from Professor Milke, Isaac Leventon, and investigators about what makes a Christmas tree particularly dangerous fuel for a fire, see: 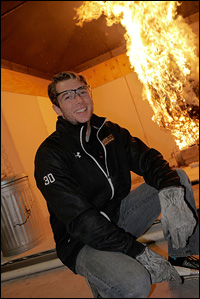