An informal settlement (IS) is a densely populated area of housing that has little to no legal status or regulation. The settlements arise as a result of housing needs for low-income residents or migrant workers. Typically, the homes are quickly assembled on any plot of available land, using materials that are donated or can be easily acquired. Globally, the number of people living in IS ranges from 200 million to 1 billion [Walls, et al., 2020] [United Nations, n.d.]. In South Africa, people in IS households comprise between 18% to 33% of the total population.  Projections predict that up to 3 billion people will live in IS by 2030 [United Nations, n.d.].

Dwellings in an IS are typically one-room homes with a single door and one or two windows. In many cases, basic utilities (water and electricity) are lacking in an IS. Should a fire occur, extensive fire spread is probable given the close proximity of the homes (see Figure 1), composition of the homes, long fire department response times, and unreliable water supplies. 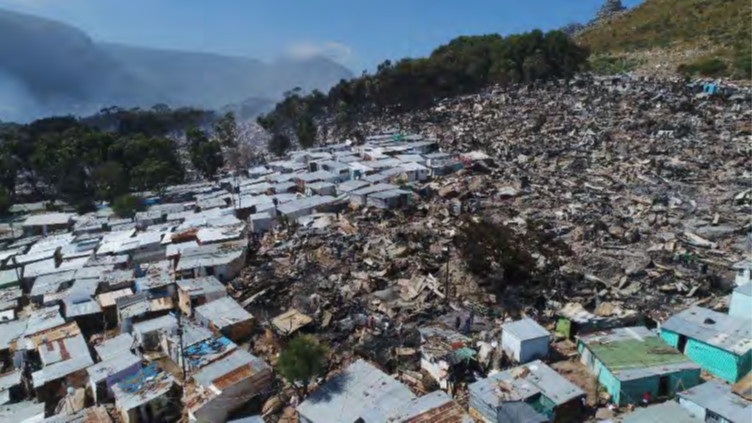 Figure 1: Post-fire Scene at Imizamo Yethu IS in 2017 [Courtesy of Bruce Sutherland from City of Cape Town]

In 2018, open flames caused approximately 40% of the fires with known causes in informal dwellings in South Africa, with electrical issues being the next most frequent cause, as indicated in Figure 2 [FPASA, 2018].  Open flames are used for heating, cooking, and lighting, especially for those homes without electrical power.  South Africa has been extending electrical power to informal dwellings in recent years, decreasing the fires involving open flames, but increased those due to electrical problems.  Unsafe lighting and heating sources such as candles are also frequently left unattended and in reach of young children [Kahanji et al., 2019]. While some dwellings have electricity, it often comes from illegal connections to municipal infrastructure through substandard wiring practices [Antonellis et al., 2018].

Contents inside dwellings can include wooden furnishings, cotton bedding, clothing, and carpeting to rubber, foams, and plastics [Wang et al., 2020]. On the outside, informal dwellings are typically made of materials that are readily available or recycled. Typically, the walls and roofs of these dwellings are composed of timber planks, corrugated steel sheeting, plastic sheeting, or anything in the inhabitants' immediate surroundings. Walls are lined with cardboard or fabric to provide insulation in the dwellings. Additionally, gaps between the walls, roof, and floor may be filled with cardboard, timber, sand, and newspaper for insulation [Cicione et al., 2019].

Evacuation modeling allowed for the visualization of egress of an IS during a fire scenario.   The model used for this analysis was Pathfinder, software developed originally to assess the evacuation of a building.  For this analysis, a model of Section 28 of the Masi IS was created (this section of the IS experienced a fire in 2019). Data was used from remote sensing to visualize the IS using Google Earth. The left image in Figure 3 shows the entire Masi IS using Google Earth. The middle image shows Section 28. The right image is a zoomed-in screenshot of Section 28 that shows the dwellings' roofs and the section's borders. Each dwelling was defined as a "room" and spaces between buildings were defined as separate "rooms" in Pathfinder. "Doors" were placed at the boundary of the section to depict the exits from that section of the IS.

Figure 3:  Diagrams of Masi IS.

The right image in Figure 3 was uploaded into Pathfinder. The model consisted of 71 households with approximately 7.3 people per household (this was a mid-range value of household sizes in the IS). The number of individuals living in Section 28 was estimated to be 522. A screenshot of the Pathfinder model of Section 28 is included in Figure 4. 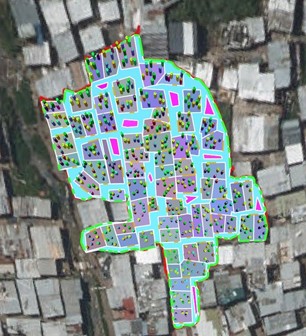 The five simulations conducted are outlined in Table 1. These five simulations explore the effect of obstructions, counterflow, and blocking.  Obstructions and counterflow were included following a discussion with Professor Richard Walls from Stellenbosch University, who related that evacuation of an IS is complicated by many residents making multiple trips back to their residences to save belongs such as appliances, televisions, furniture and mattresses, and food.  In some cases, the residents deposit some of their belongings along the evacuation pathways to create obstructions (shown in pink in Figure 4). "Blocking" separated groups of homes by a wide road to alleviate the need for residents to navigate narrow pathways to the boundary was also explored in the simulations (blocking can also serve as a fire break and provide access for fire fighters). Blocking was created by dividing the IS indicated in Figure 4 with a vertical and a horizontal road.

The results of the simulations are presented in Table 1. As expected, the combination of counterflow and obstructions resulted in a substantial increase in the evacuation time.  The evacuation time was significantly reduced via the establishment of the roads. While designating some open space for roads to provide blocking could likely be challenging to maintain, community involvement could assist in preventing any homes from being erected in these areas.

Overall, the fire problem in IS is noteworthy, considering the high frequency of fires and the high consequences experienced with many of the fires. Short of making a massive investment to provide housing for the residents, improvements could be obtained with less costly approaches.  These include providing fire safety education to residents and establishing a management hierarchy within an IS to include community leaders. Providing adequate water for fire fighting and safe electrical power to homes would be impactful should an investment for fire safety improvements become available.

* The simulations with counterflow included 20 occupants.

*Reprinted with permission from the Society of Fire Protection Engineers (SFPE).