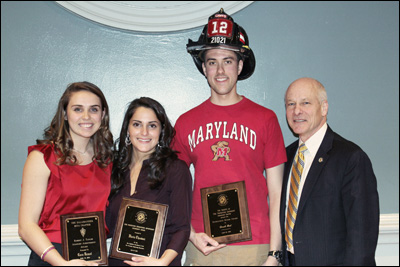 Department of Fire Protection Engineering (FPE) undergraduates were among the award recipients at the A. James Clark School of Engineering's 2014 Honors and Awards Ceremony, held April 10. The event honors students from all disciplines who have demonstrated outstanding academic performance, research skills, and contributions to their departments or fields. Clark School professor and associate dean William L. Fourney and FPE professor and chair James Milke presented the awards.

In an unexpected twist, one of FPE’s awardees, Derek Post, almost missed the ceremony, but for the very best of reasons: A member of the College Park Volunteer Fire Department, he had been dispatched to the scene of a gas leak in nearby Calverton. Post was getting ready to end his shift when the call went out–a “box assignment,” designating a serious incident requiring multiple ladder trucks and engine companies to respond.

“When we get there,” he recalls, “there was what looked like a blowtorch [coming out of] the side of the house. There was a pinhole leak in the gas feed coming into the house, and that leak somehow caught on fire.” Fortunately, the exterior of the home was brick, so while conditions were very hot and certainly risky, the team did not face an active house fire. For a while the gas was allowed to burn off, Post explains, because it was safer knowing it was consumed than letting it dissipate. “The tactical maneuver we made was [to] cool off the building,” he says, so they watered the exterior and interior basement walls while they waited for Washington Gas technicians to arrive with special equipment. His unit remained on the scene until the gas feed to the home was safely crimped. With the situation under control and his officers’ permission, his father left the dinner to pick him up. The pair returned, with Post still dressed in his firefighter gear, just as the award presentations began.

“I was wearing my boots and pants, and fortunately one of my Maryland T-shirts,” Post explains. He asked his classmates, fellow awardees Catherine (Cara) Hamel and Maria Theodori, whether he should try to disguise his attire with his father’s sportcoat. “They said, ‘No, put your lid [helmet] on, and just walk across the stage.’ So I did that, and when Dr. Milke called my name, I had a sense of pride, like, ‘This is what I do–sorry for the inconvenience!’” Milke briefly explained the situation to the surprised audience, and presented Post with his award.

This year, the awards and their recipients were:

The Department of Fire Protection Engineering Chair’s Award is presented to the department student who has made the most significant contribution during the year.

Maria Theodori, a senior, will complete her degree in December 2014 with a minor in Modern Greek Language, after which she plans to pursue a Master of Science degree in Fire Protection Engineering.  Maria is president of the student chapter of the Society of Fire Protection Engineers and through this position has been able to share her enthusiasm for the field with new and current students. Her personal goal is to help others, which is why she was intrigued with firefighting. Maria feels fortunate to have found her niche here as an FPE student where she can combine a passion for helping others with a love of science and math.

The Society of Fire Protection Engineers Outstanding Senior Award, sponsored by the society’s Chesapeake Chapter, is presented to the department senior with the highest GPA.

Derek Post is a senior and an active live-in member of the College Park Volunteer Fire Department. His dedication to the fire service has been one of the most influential experiences in understanding fire protection engineering. He currently works for AECOM in Arlington, Virginia where he has gained experience designing fire alarms and fire protection systems for a multitude of structures and occupancies. He is looking forward to graduating in December, after which he will pursue a Master of Science degree in Fire Protection Engineering. In his free time, Derek rides and works on his new motorcycle, plays volleyball with the intramural Society of Fire Protection Engineers’ team, and of course rides fire trucks!

The Salamander Honor Society presents the Robert J. Taylor Academic Achievement Award to the department junior with the highest GPA.

In addition to enjoying her engineering coursework, junior Catherine "Cara" Hamel enjoys mentoring a sophomore research project, serving as a Clark School Ambassador, being a part of the RISE Leadership Academy, sitting as an advisory board member for the Elizabeth Seton High School LEAD Engineering Program, and being a part of the University Honors Program. She also spends her time working for New Student Orientation, and is a member of the Salamander FPE Honors Society, the Omicron Delta Kappa Leadership Society, and the student chapter of the Society of Fire Protection Engineers. Cara is excited to spend summer 2014 in London, UK, and Epernon, France, conducting research on fire spread in concrete structures.

The Department of Fire Protection Engineering is also pleased to announce an additional award not presented at this year’s ceremony:

Nick Schraffenberger is a dedicated student of engineering as well as other disciplines, which has earned him a 3.791 G.P.A. He is currently involved in a sophomore research project focused on assessing the ability of open area smoke detectors to reject nuisance alarms caused by dust. In addition, Nick is heavily involved in the Zeta Psi Fraternity as the head expectations chair. He is considering all options for the summer; however, he would be excited to work for Cintas in Cincinnati, OH or ARUP in New York.

Congratulations to all of these exceptional students!