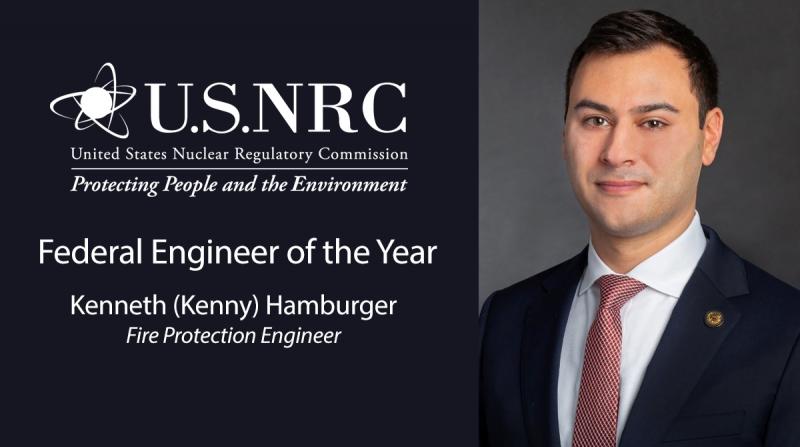 Like the FPE major, the work I do at the NRC is pretty unique.

Hamburger – who received his B.S. in FPE in 2012 and M.S. in FPE in 2013 – was selected for this award for leading innovative research activities associated with advancing nuclear power plant (NPP) fire safety, risk assessment and hazard mitigation. The agency identified a potential safety hazard involving electrical High Energy Arcing Faults (HEAFs) — a phenomenon not well understood. Hamburger created a multifaceted research plan to study HEAFs and implemented several key elements. In addition, he served as an expert on a joint HEAF working group with nuclear industry, and on an international panel on validation of fire models used in safety analysis.

“This type of electrical failure is typically observed in switching equipment with voltages of 440V and higher,” said Hamburger. “When switching equipment is operating normally, electric current flows through the intended circuit path. An insulating medium, usually air, prevents the current from flowing to other conductors, but when the electric field across the insulating medium gets too big, the medium can start to ‘break down,’ allowing current to jump across the gap. As the current flows across the gap, the resistance of the medium causes the arc to generate significant heat, light and pressure, which can damage surrounding equipment. So, the goal of our research program is to develop tools and methods that risk analysts can use to quantify and model the HEAF hazard to assess overall risk to nuclear power plants.”

Hamburger has come a long way since his start – as a volunteer at the Pikesville Volunteer Fire Company (Baltimore County) in 2007, while he was still in high school.

“A number of members there had graduated from FPE, or were in the program at the time (e.g., Dennis Gentzel, Adam Goodman, Jeffrey Reetz, CJ Giblin and Josh Schwartz),” Hamburger said. “In addition to hearing about this unique program, I also learned about the many scholarship opportunities that were available through the fire department, the Maryland State Fireman’s Association, the Baltimore County Volunteer Firemen’s Association, and the Maryland Higher Education Commission, which sealed the deal for me.”

During his tenure at UMD, Hamburger befriended a number of FPE students who had conducted summer internships at the NRC, including Mollie Semmes, who also went on to work for the NRC post-commencement.

“Mollie was the one who recommended my current NRC position to me, which I found particularly interesting – I was never a huge fan of codes/standards-type work, and the NRC doesn’t deal much with the life safety aspect of fire protection,” said Hamburger. “Our safety goal has more to do with risk to the nuclear core and the hazards that fire presents to critical safety equipment inside the plant. I also enjoy the amount of original research we do; like the fire protection engineering major, the work I do at the NRC is pretty unique.”

The Federal Engineer of the Year award is sponsored annually by the NSPE’s Division of Professional Engineers in Government. Hamburger will be honored at a ceremony set to take place at the National Press Club in Washington D.C. on February 18, 2021.